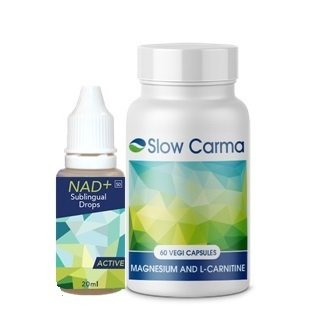 Active Pack - NAD+ in combination with Magnesium and L-Carnitine

By using NAD+ in combination with L-Carnitine and Magnesium targets the mitochondria, enabling rejuvenation and optimal functioning.

The power of NAD+

When NAD+ levels go below the minimum threshold in the mitochondria; it can lead to a loss of enzyme functionality which eventually leads to dysfunction of the organelle. People with a mitochondrial shortage can have trouble to concentrate, low energy levels or chronic fatigue.

Nerve cells only have only one mitochondrion, while mitochondria make out a third of a heart muscle cell’s mass and therefore low NAD+ levels may lead to fatigue brought on the hearts mitochondrial cells not performing optimally.

Calorie restriction has provided an interesting glimpse into the mechanisms regulating aging. Animals undergoing a dietary regimen involving strictly reduced caloric intake (approximately 30–40% compared to normal intake), exhibit lifespan extension and reduced morbidity development with aging. These benefits have been demonstrated to be partly mediated by a family of NAD+-dependent histone/protein deacetylases, called the sirtuins. Histone deacetylases function as epigenetic regulators of gene and protein activity that act via catalytic cleavage of acetyl groups from lysine residues.

NAD+-dependent histone deacetylase (HDAC) activity in relation to gene transcription. DNA is typically inaccessible to transcription complexes as it is tightly wrapped around histone proteins. Once acetylated (usually by an acetylase enzyme that attaches an acetyl group to a lysine residue on the histone protein), the DNA becomes physically available for transcription. NAD+-dependent HDAC enzymes effectively reverse this process by catalytically removing acetyl groups from lysine residues, thereby tightening the DNA/histone complexes. These enzymes require NAD+ and an acetylated lysine as cofactors for activation. Therefore, the presence of NAD+ promotes enzyme activity, while the presence of the cleavage product of the deacetylation reaction, nicotinamide (NAM), inhibits it. In the case of protein activation, the NAD+-dependent HDAC acts by removing acetyl groups from lysine residues directly from the protein. This may activate or inhibit the protein, depending on the particular context.

NAD+ acts as a free-radical scavenger, contributing to cellular and DNA health. This makes it a valuable investment in ensuring your cells “stay young” and work optimally.

The power of L-Carnitine and Magnesium

Humans, are known to be famine-resistant but is sensitive to obesity in environments of persistent over nutrition. Certain cell-intrinsic metabolic features are subject to an evolutionary drive favouring lipogenesis. Mitochondrial protein acetylation appears to be such a system where acetyl-coA is the central mediator of fuel oxidation and is saturable. This metabolite is postulated to be the fundamental indicator of energy excess, which imprints a memory of nutritional imbalances by covalent modification.

If excessive fuel enters mitochondria, the mitochondrial Coenzyme A (CoA) pool could be largely acetylated/acylated and have little free CoA available for alpha-ketoglutarate dehydrogenase (a-KGDH) enzyme system to function. When the electron transport chain (ETC) is running at capacity, the hydride transfer coenzymes will begin to accumulate in reduced (NADH and FADH2) forms, which limit the formation of the oxaloacetate that is necessary for acetyl-Coenzyme A (Ac-coA) to enter the cycle at citrate. By definition, if the ETC is running at capacity and protons are being pumped into the mitochondrial intermembrane space for maximal ATP generation, the intermembrane space is maximally acidified. This also means that the pH in the mitochondrial matrix will be alkalinized, potentially to a value as high as 8.2.

In the clinical trial done on the effectiveness of Slow Carma, it was found that L-Carnitine is the only metabolite to bind to the excess acetic acid in the mitochondria and carries it into the cytosol, and if in excess, it can be excreted in the urine via the kidneys. This releases the Coenzyme A which restores the functionality of the alpha-ketoglutarate dehydrogenase enzyme which is the major entry for acetate into the tricarboxylic acid cycle.

Save this product for later

"After using AEROMAG for a few days, as an ex-smoker, I felt I had improved breathing and more energy."

"Energy and focus on the go! This is what I was looking for to help me focus during a hard day at the office, and the bonus - I don't think about my cravings!”

"AERONAD helped to improve my focus during a stressful time, and as a bonus I had almost non-existent cravings for cigarettes. Win- win.”